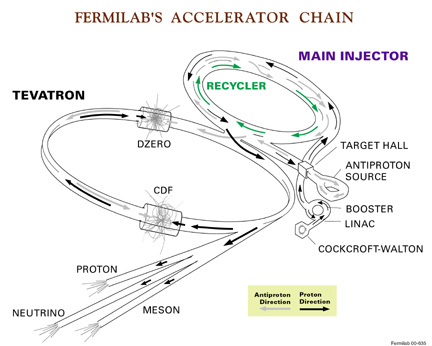 The Tevatron and Fermilab's other accelerators are operated from the Main Control Room.

Prior to its shutdown on Sept. 30, 2011, accelerator operators at Fermilab created particle collisions by sending beams of protons and antiprotons in opposite directions through the Tevatron ring. These beams created collisions at the centers of the CDF and DZero particle detectors. Every 10 hours or so, operators discarded the remainder of the particles circulating the ring by directing them into a metal target, and then they injected new beams of protons and antiprotons, known as a store, to start the process all over again. Over its lifetime, the Tevatron has had thousands of stores.

When the Tevatron shut down on Sept. 30, 2011, scientists first stopped the CDF and DZero detectors. They then stopped the data acquisition system and switched off the electricity to various subdetector systems. Then they shut down the Tevatron. Helen Edwards, who was the lead scientist for the construction of the Tevatron in the 1980s, terminated the final store in the Tevatron by pressing a button that activated a set of magnets that steered the beam into the metal target. Edwards then pushed a second button to power off the magnets that guided beams through the Tevatron ring for 28 years. For about a week following the shutdown, accelerator operations worked to warm up the superconducting magnets, normally kept at 4.8 Kelvin. Once the magnets reached room temperature, crews began removing the Tevatron's cooling fluids and gases.

It took about a month to fully shut down the CDF detector, including time to remove its cooling fluids and gases. Shutting down the DZero detector took longer, since the collaboration took data using cosmic rays as a way to double-check the calibration of its detector. The DZero detector was completely shut down after about three months.